You are here: Home / RV Travel Destinations / North Carolina, Part 1 – Lexington and Durham
0shares
​About one year ago in November of 2014, Tom bid farewell to his job and immediately left on an errand run to transport a boat from Michigan to Florida. His trip took him through the town of Cornelius, North Carolina, where old family friends had moved to and was a convenient overnight break in the long haul.
​
Now a year later in November 2015, he found himself in the Old North State again. North Carolina had always been a destination on our travel map. Our family friends joked that we should save it for the end of our journey, because we were sure to fall in love with the place and want to stay. Our friends in Cornelius had offered a place to boondock on their farm and join them for Thanksgiving at the end of the month. However, we had one more stop planned before we got there.

Our Campground and Site(s)

​We went to the Thousand Trails campground called Forest Lake RV Resort where we were to stay for nearly two weeks. It had full hookup (water and electric), which was wonderful because we can pretty much use everything just as we would if living at home. We also have an electric heater that helps offset what we use in propane – and even though we are technically “in the south” it still can get pretty cold at night!
​We arrived in pouring rain, and our campsite was a mess! It was shaded and small, and didn’t dry out like we hoped. First chance we got we moved sites to what we think was the best site in the place overlooking the small lake for which the camp was named. The views out all our windows were beautiful, and we got lots of sunshine! The resident ducks were constant entertainment, and we were just a boardwalk away from the hot tub facilities. 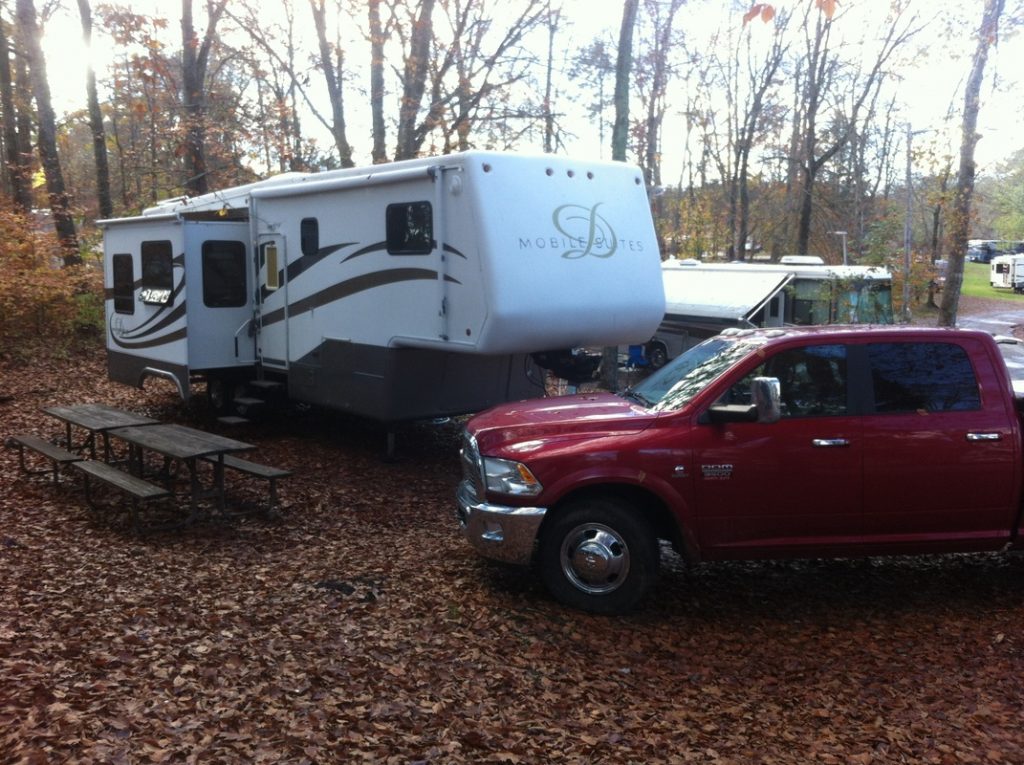 Old Site; The picture doesn’t do it justice, but it was shady, muddy, and chilly. 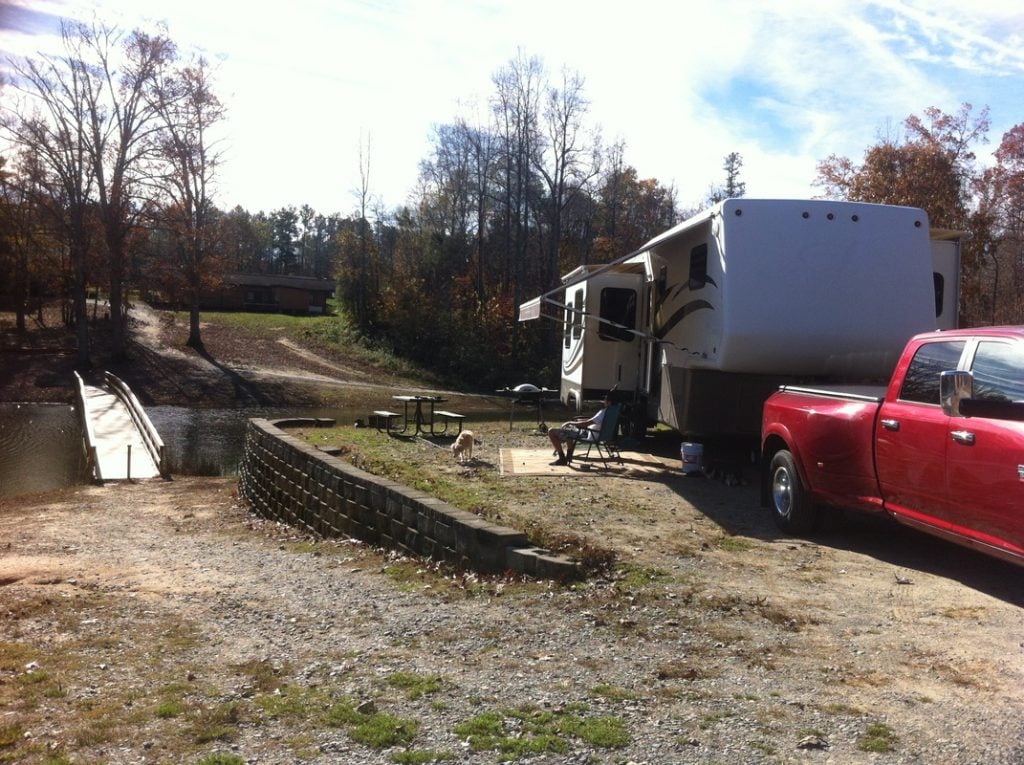 New site! With sun and a view!
​It was our first time using our Thousand Trails membership, which was included for free when we bought our fifthwheel. Overall it was a great experience, and you can’t beat free full hookup!

​The campground was near a smallish town called Lexington, which is known for its annual Barbecue Fest that draws over 100,000 people and big name celebrities. With a reputation like that, we knew we had to try the barbecue. We went to the #1 BBQ place in town (per Trip Advisor and Google Reviews) for dinner to give it a go.
We have some good friends from Michigan who lived in North Carolina for a time before moving back to Michigan to be near family. We had long ago heard their warnings about North Carolina BBQ as it compared to how we do it in the Midwest. Very different. This BBQ was light, and vinegary, with not a lot of spices and seasoning besides the meat and the smoking/cooking process. Michigan BBQ as we know it has a dark spicy sweet sauce, and the more the better! While we enjoyed our NC BBQ meal, well, let’s just say we prefer the Michigan way…
​
We also visited the Bob Timberlake Gallery in town, and Childress Vineyards. 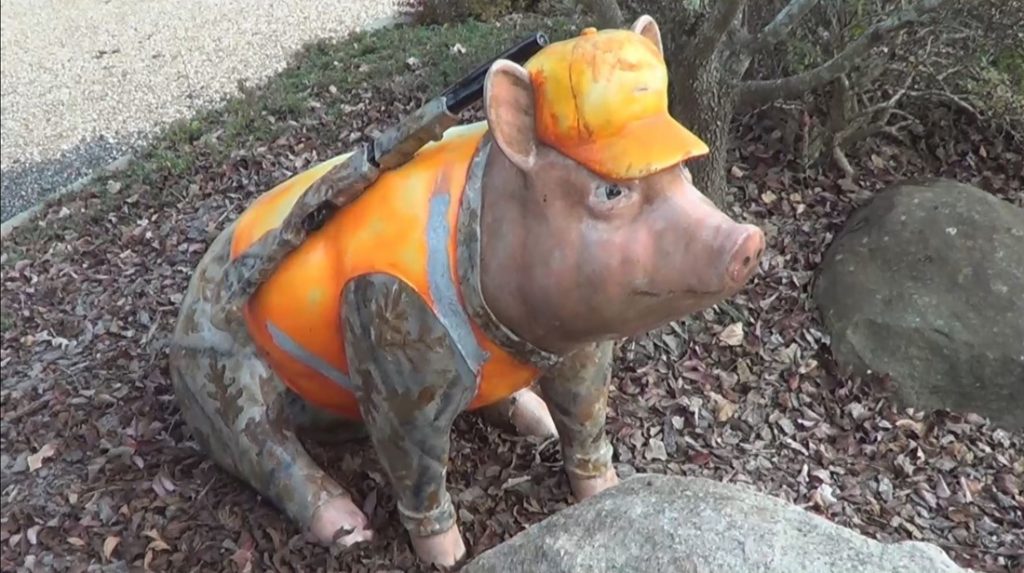 One of the “Pigs in the City” that greeted us going into the Bob Timberlake art gallery. It is part of a citywide art theme that goes along with the BBQ fest. This one made us chuckle, especially since deer season opened back in Michigan during this time.

Once of the best things that happened to us during our time in Lexington was that we met fellow full-timers like us! We met Marc and Julie Bennett, aka RV Love, and Brad and Jen Stermer, aka Roaming Free in a RV. They were our first in-person contact with a community we’ve read about and followed on the internet. We had such a wonderful time with them and learning from each other, and hope to meet up again down the road!

​Our location in Lexington put us within striking distance of some more good friends located in Durham. We left our rig at the campground and traveled the 1.5 hours to stay a few nights with them.
​In North Carolina, academia rules in the Research Triangle, comprising Raleigh (the state capital and home to N.C. State University), Durham (Duke University), and Chapel Hill (University of North Carolina). We had heard of this Research Triangle and how this area has been booming with the influx of technology, medical, and life science companies attracted here by the major universities. This has turned the Research Triangle into an up and coming Silicon Valley, and in return the economy has flourished – despite the mid-2000s recession.
​While visiting we explored the town and hit places such as Duke University, the Sarah P. Duke Gardens, and Durham’s Downtown. Duke campus was historic and beautiful, and the gardens adjacent to it were stunning. We had a lot of fun in the bamboo forest.

​Downtown was hip and edgy, with historical buildings turned into entertainment centers with restaurants and shops.  For example, there was a former site for the Lucky Strike cigarette factory, but has since been turned into a historical district with tables, chairs, fountains, and decorations. 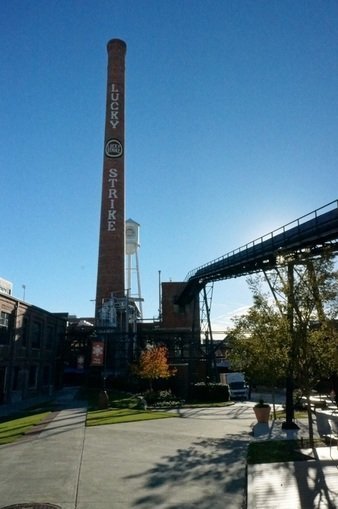 ​Our friends in Durham buy, renovate, and sell houses, so we toured the area checking out the housing market, which is also doing very well. A style called “Mid-Century Modern” that is characterized by clean simplicity and integration with nature has grown in popularity, and this is their specialty.
​The area in general is packed with opportunity, and it was really neat to go and get a taste for it!

Moving South for the Winter

​As we have moved south from Michigan to West Virginia, to Virginia, to North Carolina, it has been like we have traveled back in time. Each new place has more leaves on the trees than the last and we have balanced on the cusp of fall turning to winter.
​When we were in Durham, a major snowstorm hit Michigan that blanketed practically the entire state in multiple inches of snow. While our friends and family sent pictures of the white stuff piling up on their deck railings and cars, we returned pictures of the sunny and 55 degree day we were having biking around the town. 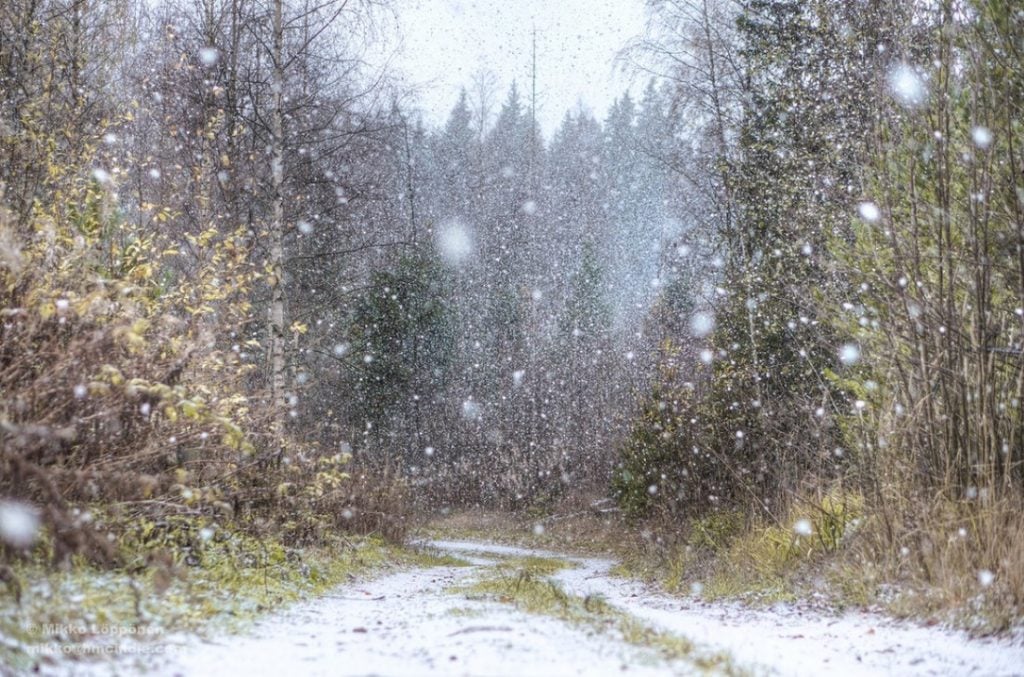 “First Snow” by hmcindie | http://hmcindie.deviantart.com/art/First-Snow-Finland-2013-Winter-408247936
​There is something magical about the first big snow – everything is just covered in pristine white, and it is so new. Then, to put on some Christmas music and do some decorating with a cup of hot cocoa and maybe a fire in the fireplace…it’s fun! We missed that this year, and it will go into our evaluation of our where we want to ultimately end up.
However, the thing with winter is that it isn’t just the first snow, or snow for the holidays…it is snowy, icy, and cold for months! This is a picture of my dad, snow-blowing during a blizzard that doesn’t quite look so magical: 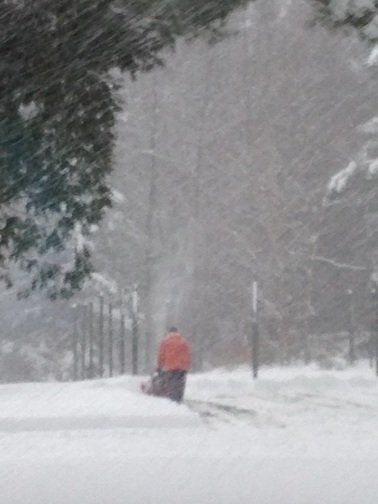 ​So for now, we are enjoying being able to get outside more, get more sunshine, and be warm. But we are going to have to keep moving south soon – the nights here can get below freezing and the days only get up into the 50s mostly. We are torn between wanting to take our time and get to know an area, and a strong desire to get to where flip flops are still in season!
Here are some pictures from one of the frosty mornings we’ve had: 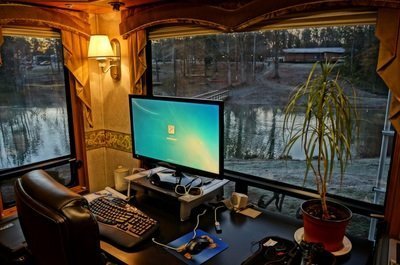 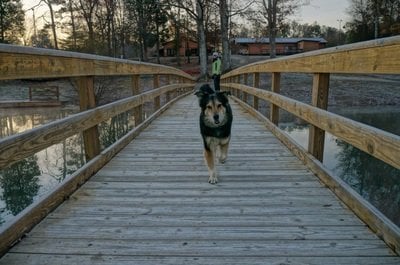 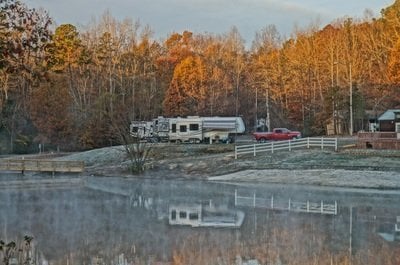 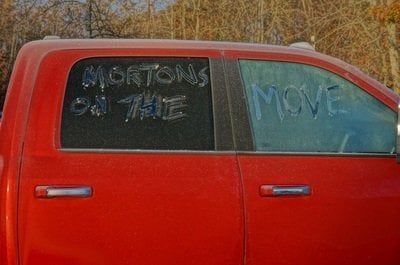 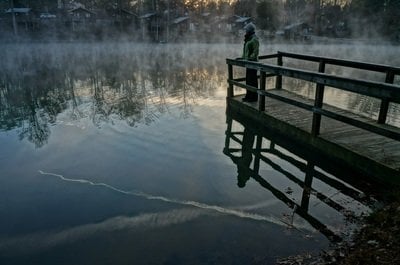 We still have several weeks left in North Carolina, but we are looking forward to traveling back all the way to summer; we’ve had a lot of fall this year 🙂 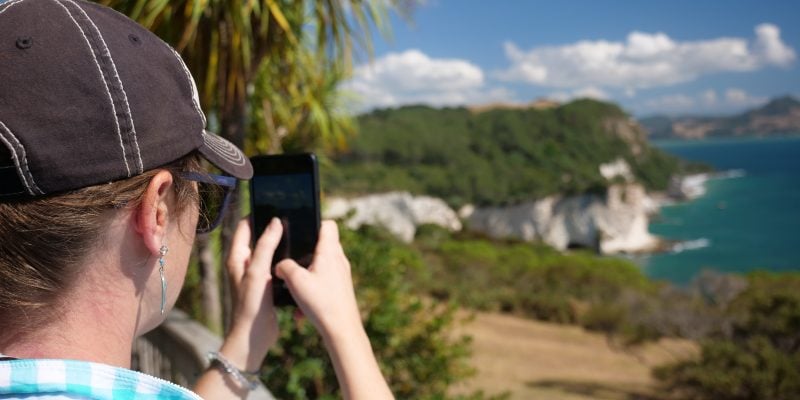