You are here: Home / RVing to Alaska / Go North / Top Ten Things to Do in Dawson City, Yukon

Dawson City:  Located at the confluence of the Yukon and Klondike rivers, this town embodies the gold rush days from which it was born.  Vibrant, eclectic, and a bit gritty, here the glory days of the past live on in the dirt streets, architecture, and residents.

This town is home to just over 1300 people, although many do not stay through the winters and summer is a good time to visit.   There is so much to see, do eat and drink here and after passing through the town twice before, we finally got some time to take in this unique community during the last week of July 2019.

Watch on YouTube
Watch on Amazon Prime
Northern Alaska and Canada both have a deep history in gold mining, and Dawson City is no exception.
We had a blast hanging around this fun town, and became one of our favorite northern towns!

Here are 10 things you definitely don’t want to miss:

Over millions of years gold worked loose by erosion makes its way into rivers and streams and these machines were designed to extract it as fast as possible. 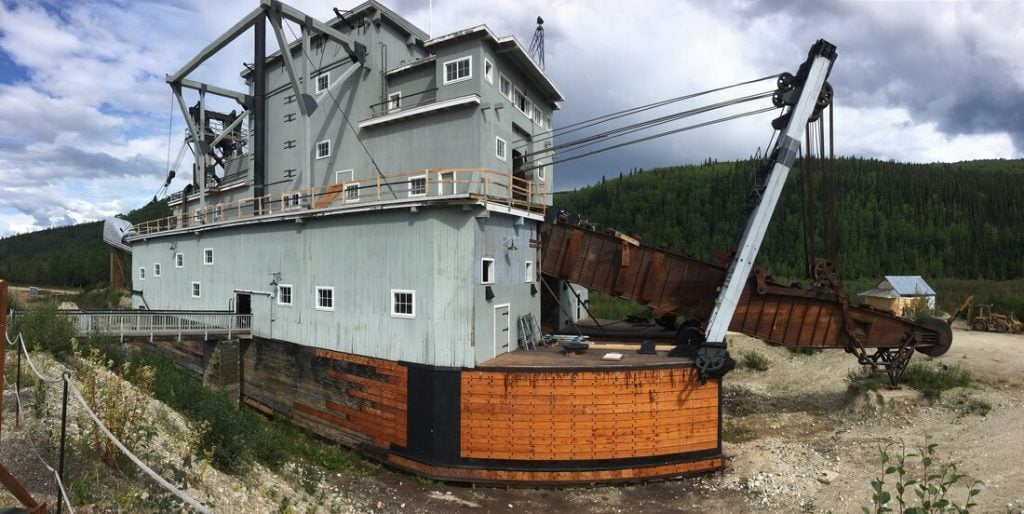 One of these massive dredges of the past, Dredge Number 4, has been restored by Parks Canada and is open for tours.  Originally built in 1912, this massive boat began operations on the banks of the Klondike river and floated in a pond it created by its operation.  The purpose of the dredge was to dig down deep in the river and stream beds and pick up the loose placer deposits that contained the highest concentration of gold.
​It did this by using a massive bucket line that would continuously rotate and take a new bite with each bucket.  The buckets would lift the rock and gold up 107 feet into the center of the dredge where it would be dumped into a 50′ long spinning drum called a trommel screen that would extract the largest rocks and expel them out the back of the dredge on a conveyer that would rotate side to side as it slowly moved forward, crating the unique tailing pile shape.  The finer gold containing material then made its way through sluice boxes via huge quantities of water and a series of grates and finally a coconut husk mat would catch about 75% of the gold. 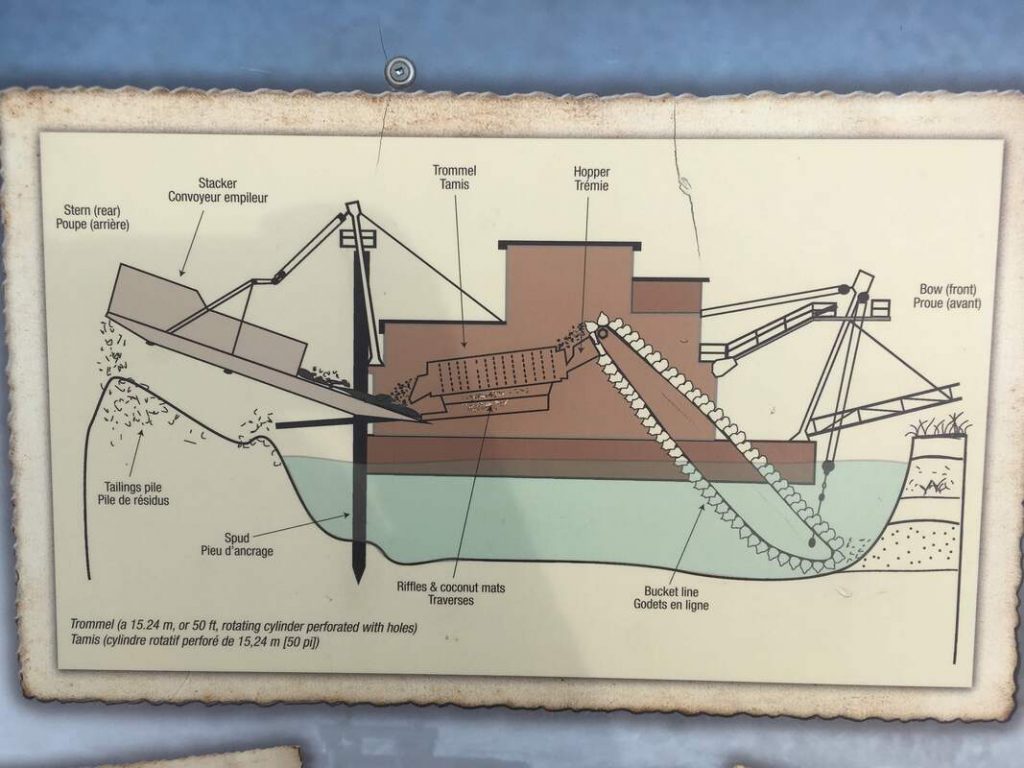 The dredge was electrically powered and consumed around 700KW to operate its massive DC motors that drove pumps, winches, gears, and chains.  When in operation this was one very loud machine!  Surprisingly, how gold is extracted today isn’t much different, aside from the fact that it is mostly dug out with bucket loaders and dump trucks instead of dredges.

​We also visited the Dänojà Zho Cultural Center located downtown to learn about the impact this all had on the native populations that called this place home prior to the boom.  The Center has a great film and exhibits about the Tr’ondëk Hwëch’in First Nation and the challenges that they faced over the years.  Originally, the site of Dawson City was a traditional fishing and hunting camp, but the gold boom almost destroyed the native community altogether.

Luckily, the chief at the time, Chief Isaac recognized the impact the goldrush was having on the people and worked to move them just downstream to the settlement of Moosehide that still exists today.  Years of struggle has existed between the native people and the government, but Land Claim Agreements and a now working relationship with the Canadian Government have helped to find a modern balance and inclusion in the current society of the north.

The Dawson City Visitor Information Centre is a great place to learn even more about this town’s amazing past, as well as it’s present! With many exhibits, artifacts, helpful staff, and several short films that will take you back in time to see when the dredges and paddlewheelers were in operation.

This town is great for walking. The wooden sidewalks and old-timey architecture invite travelers to meander the streets and drift into the many shops, restaurants, and watering holes. 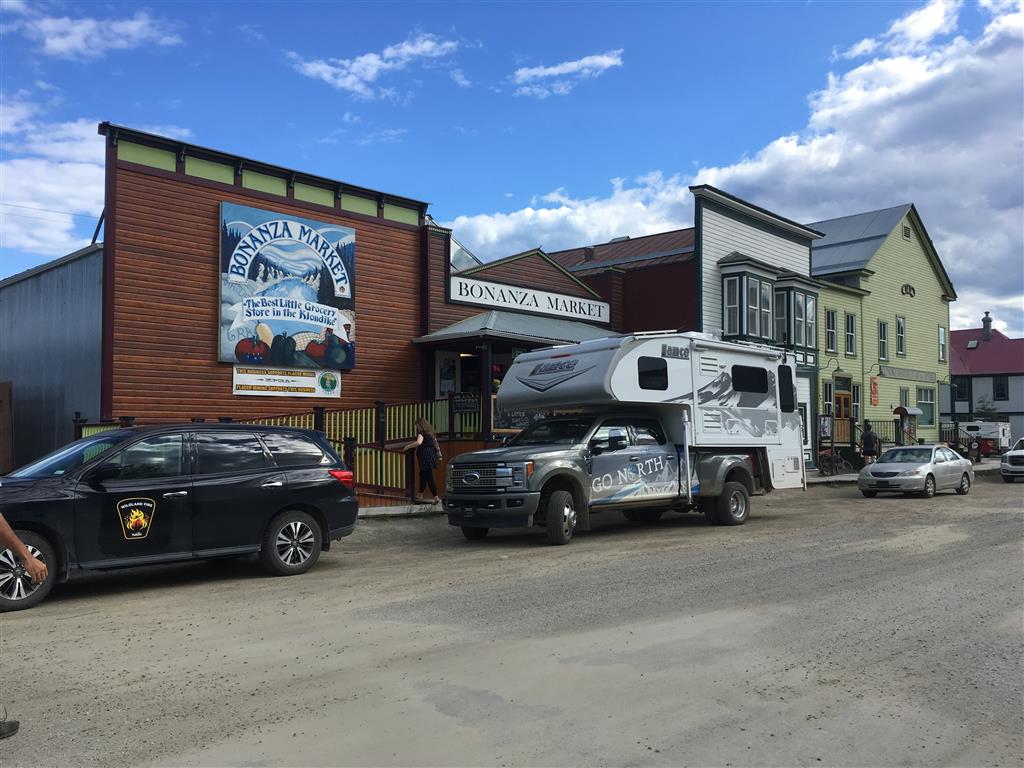 This unique establishment has a gambling hall and stage where each night vaudeville-type shows are put on for the guests. We had seats right up front where, willing or not, you might even get to partake in the show! 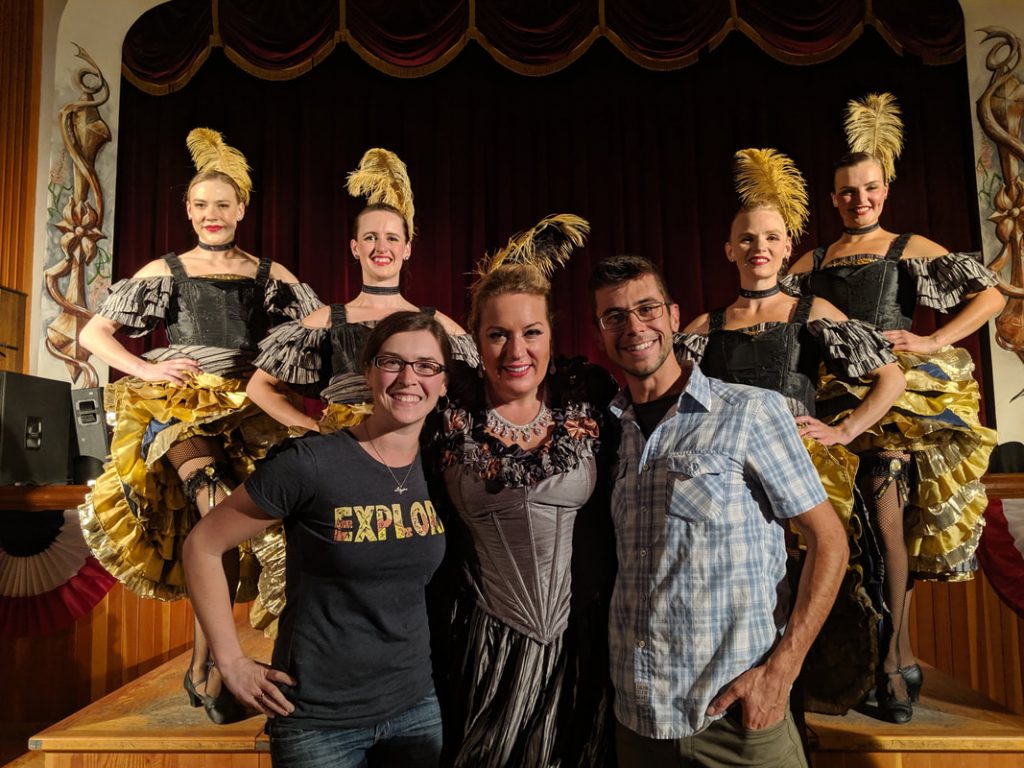 Starting in 1973, the Downtown Hotel in Dawson City has been serving up cocktails laced with…HUMAN TOE! 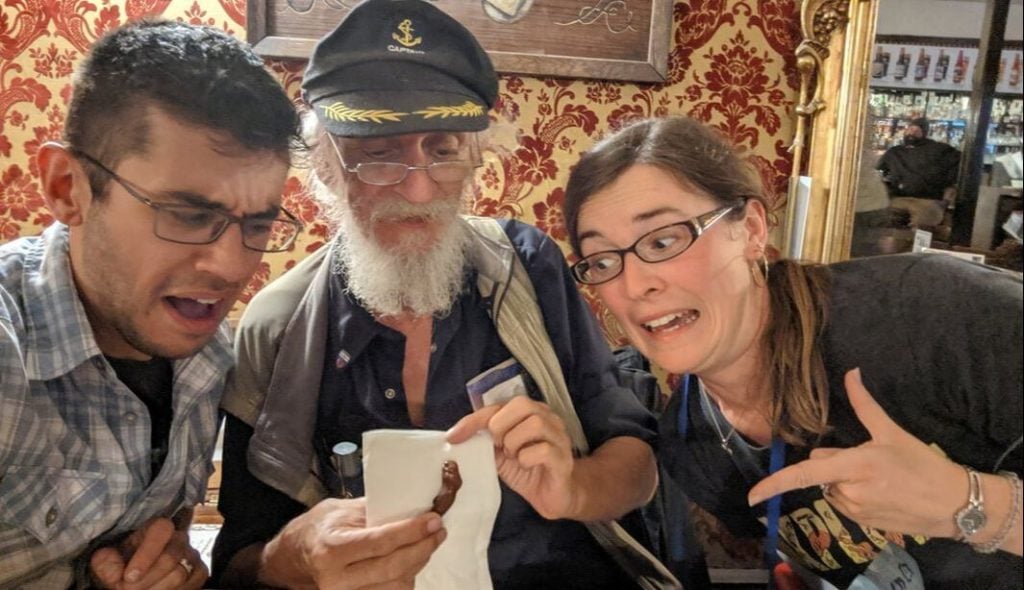 Captain Dick Stevenson started the tradition of becoming an “honorary Sourdough by kissing the Sourtoe.” This was after he found the necrotic toe of an old rum rummer’s from the 1920s, amputated after some severe frostbite and preserved in a jar of the liquor they were smuggling. Since then, there have been many toes, and many honorary Sourdoughs!
​It was the most disgusting thing we’ve ever done, and we highly encourage anyone who comes to Dawson City to do it! (and please say hi to Terry for us ?)

Popular among tourists and the locals, Midnight Dome is a large hill that provides an awesome overlook of town and the Yukon River.

Bonus! Top of the World Highway

Even if you aren’t going all the way to Alaska, driving up onto the top of this mountain range and seeing the views is so worth it! We caught the ferry across the Yukon River for the third time of the summer, and once again drove the amazing Top of the World Highway, this time with fog and clouds sitting the valleys beneath us. 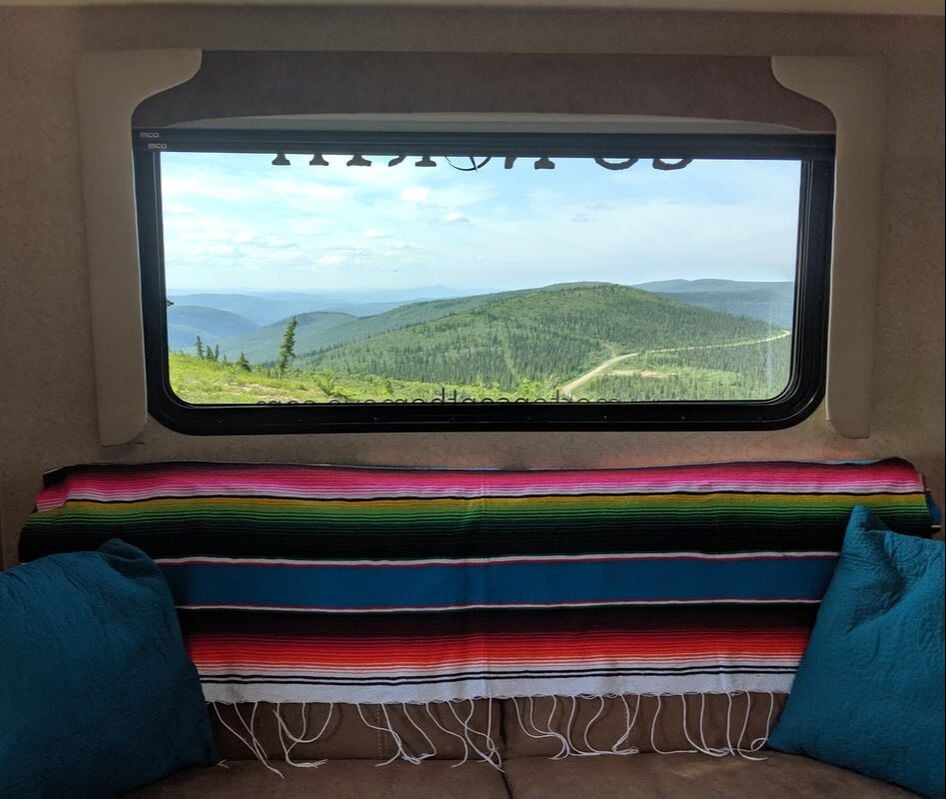 Campgrounds we stayed in:

The Go North Expedition is made possible by Lance Camper Manufacturing, Battle Born Batteries, Truma North America, Dometic, LivinLite.net, Hellwig Suspension Products, and viewers like you through Patreon. Thank you! 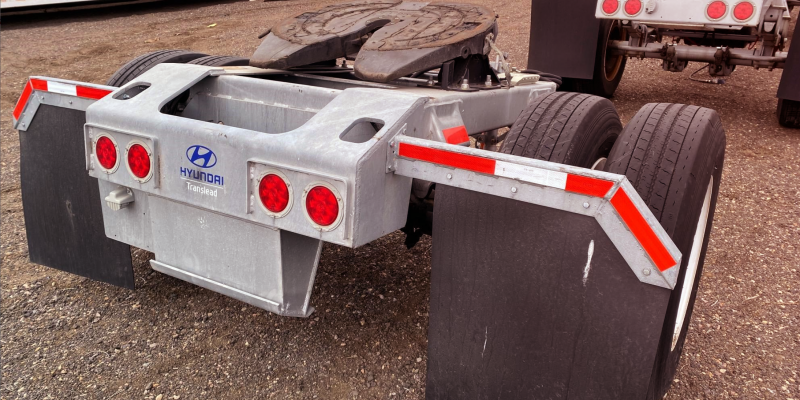 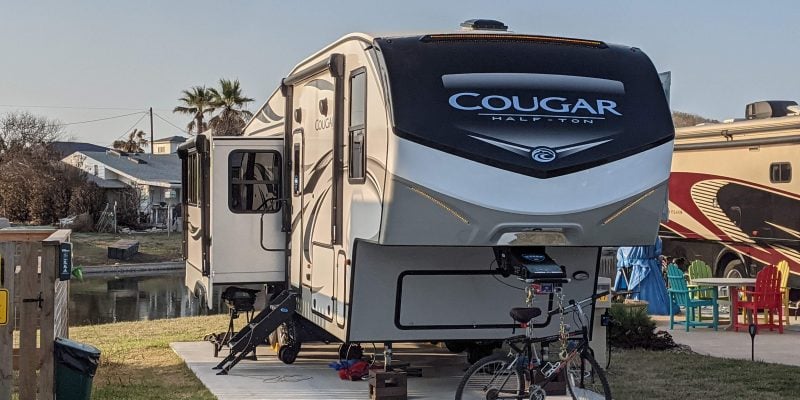